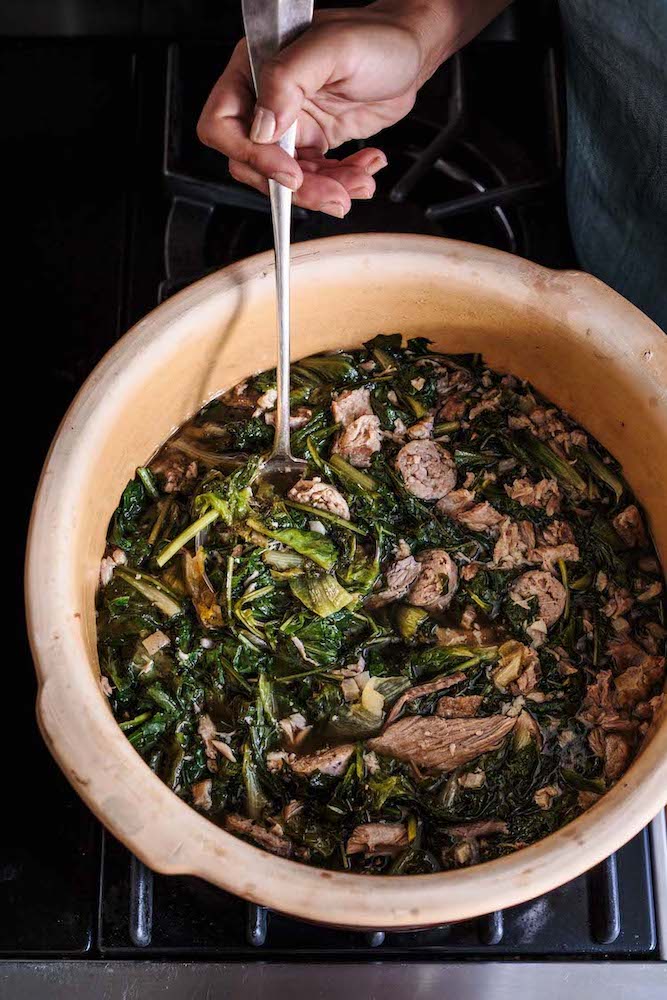 I was a teenager when I first heard the phrase “Italian wedding soup.” Unlike some Italian Americans, I didn’t grow up eating it. I took the name literally, of course. Magazines and television hosts billed the vegetable rich, meat-studded soup as a classic recipe for nuptials. Wrong. If you’ve ever been to an Italian wedding, you know it would be a challenge to find hot soup anywhere in the joint. Soup isn’t even the proper translation for minestra, which denotes a specific category of brothy dishes.

Minestra maritata refers, instead, to “wedded broths,” nuanced flavors betrothed to one another as they are blended and simmered, achieving a liquidy, meaty, vegetal polygamy. The dish originates in the Italian south, where it takes on many forms. In northern Campania’s Alto Casertano, minestra maritata is eaten to celebrate the annual pig slaughter. In the depths of winter, pigs are butchered and their bones are boiled with any remaining scraps of the previous year’s prosciutto. The broth is enriched with dandelion greens, cardoons, and escarole, each pruned and prepared separately before they head into the meaty minestra.

In the Irpinia zone of southern Campania, deep in the Apennine Mountains, most recipes for this winter dish also call for nnoglia di maiale, a salami made from pressed, cured pork stomach and intestines.

The pork theme continues in Naples, where minestra maritata, praised for its restorative properties, is served for the Feast of Santo Stefano on December 26. The Neapolitan version is richer in its meat content, perhaps owing to the wealth of Naples compared with its rural neighbors. It unifies three separate broths: pork skin and other scraps, beef shank, and hen. A dozen or so foraged and cultivated greens from around Mount Vesuvius are also prepared separately before joining in.

Though there are no sure traces, immigrants from Campania probably brought their varied versions of minestra maritata to the United States. Some considered the soup an exclusively winter dish, while others embraced both the Christmas and Easter associations. Lacking the variety of bitter herbs available in south-central Italy, the diversity of greens was scaled back and reduced primarily to escarole. The connection to the pork slaughter ritual disappeared, small chicken meatballs crept into the equation, and a new dish, with a name similar to but decidedly divorced from its origins, was born.

The minestra maritata recipe here pays homage to its roots but is modified in a way that is more practical for home cooks today; rather than boil each ingredient individually, the pork and vegetables are cooked separately, then married in a single simmering pot.

There are literally tens of thousands of variations, each household using a proprietary recipe with its own time-honored proportions of greens. If you have to choose just a couple, escarole and dandelion greens make a good compromise to the whole mix. Don’t worry about finding pig skin or ears; many butcher shops will give them away for free or at a nice discount.

Place the ribs, pig skin, bones, pancetta, pig ear (if using), and trotter (if using) in a large pot and add enough water to cover. Bring to a gentle simmer over low heat, skimming off any scum that rises to the top.

Meanwhile, bring a large pot of water to a boil over high heat. Salt the water. When the salt has dissolved, add the greens, working in batches as needed to avoid overcrowding, and boil for 30 seconds to 1 minute. The greens should still be very al dente. Drain the greens and repeat with the remainder, allowing the water to return to a boil after each batch. Spread the greens out on a baking sheet to cool for about 20 minutes. When cool enough to handle, gently squeeze out some of the excess water and chop into 1-inch strips.

When the ribs and pig skin are tender, 2½ to 3 hours, remove the ribs, skin, bones, ear and trotter from the broth and set aside. Add the sausages to the pot and cook on low for 10 minutes, just until cooked through. Remove and set aside. Strain the broth, then return it to the heat. Pick the meat off the ribs and trotter, reserving the meat and discarding the bones and ear. Cut the skin into a small dice. Slice the sausages into ¼-inch-thick rounds.

Add the rib meat, diced skin, any meaty bits, sausage pieces and greens to the broth. Season with salt and simmer over low heat until the greens are very tender, about 20 minutes. Serve immediately with Pecorino dusted on top.

Reproduced from Food of the Italian South, Clarkson Potter (2019).