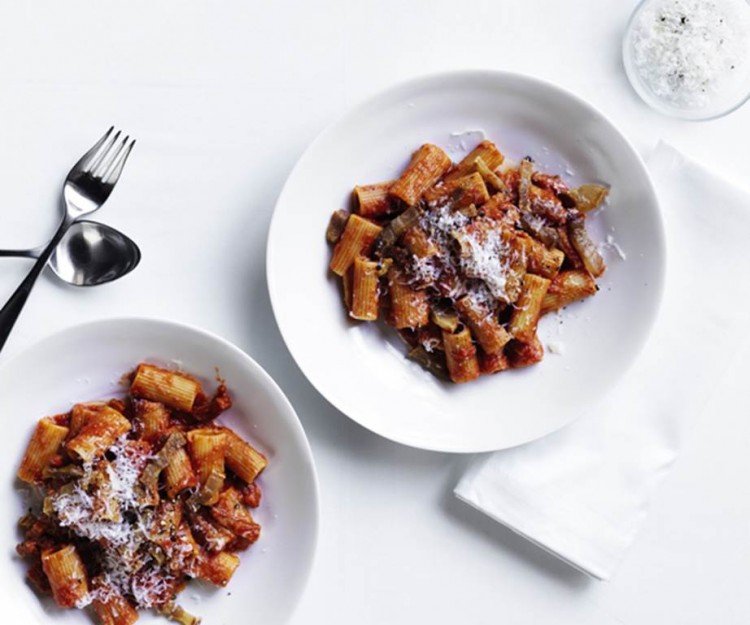 Last year I covered Sarah Cicolini’s Roman trattoria Santo Palato for Australian Gourmet Traveller, one of my favorite magazines to contribute toe. The article included 7 recipes that the Abruzzo-born chef serves in her adopted city, including some of the Italian capital’s classics. She says of her version of amatriciana, “There’s no one recipe; everyone has their own spin on it. Like Sora Lella, the late and legendary Roman chef, I use a touch of vinegar. This trick, along with the short cooking time for the tomato sauce, keeps it light and pleasantly acidic. I finish the dish with some crisp guanciale for a contrast of texture.”
She’s right–there’s no one recipe. Some use bucatini, others mezze maniche or rigatoni. Some use onion or garlic, a few use both.  Roscioli uses shallots. Some cooks employ black pepper as a piquant seasoning, others use chili. The lack of consistency extends to the sauce’s origins. Most claim it was invented in the village of Amatrice, others refute this contending it was created in Rome by adding tomato sauce to shepherd’s dish of pasta dressed with sheep’s cheese and guanciale. Regardless of its genesis, the dish is undeniably Roman today.

Dry-roast the peppercorns in a small frying pan over low heat, swirling until very fragrant (4-5 minutes). Cool, then coarsely grind with a mortar and pestle. Combine with the Pecorino Romano.
Cook the guanciale in a large saucepan over medium heat, stirring occasionally, until the fat renders and the guanciale is crisp (7 minutes). Drain the guanciale on paper towels, leaving 2 tablespoons of fat in the pan and reserving 1 tablespoon of fat separately.
Add the vinegar to the pan and cook until evaporated (1 minute), then add the tomato passata and simmer until thickened (15 minutes).
Meanwhile, cook the pasta in a large saucepan of salted boiling water until very al dente (at least 2-3 minutes less than the cooking time recommended on the box). Drain, reserving a cup of pasta water.
Add the pasta to the sauce, increase the heat to high and cook, stirring constantly and adding pasta water as needed to keep pan from getting dry, until al dente (2-3 minutes). Remove from the heat, then stir in the reserved fat, half the guanciale and a handful of the pecorino mixture. Add most of the remaining pecorino mixture, stirring constantly and loosening the sauce with a small spoonful of pasta water at a time as needed, until sauce coats the pasta. Salt to taste. Serve topped with the remaining guanciale and the pecorino mixture.
Read the whole article and accompanying recipes here. Photo by BEN DEARNLEY.
Katie Parla2020-12-16T03:24:40+01:00December 16th, 2020|Categories: Abruzzo, Food & Wine, Recipes, Restaurants, Rome & Lazio|1 Comment