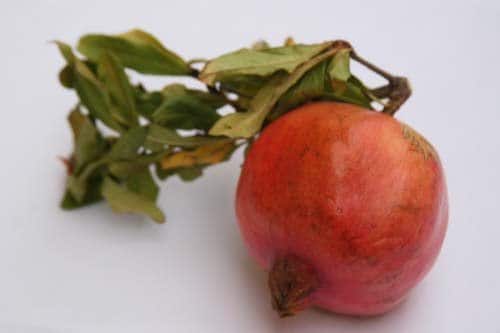 Pomegranates are traditionally eaten on the second night of Rosh Hashanah.

Rome has one of the world’s most ancient Jewish communities–the first Jews arrived during the Republican age around the year 161 BCE. This historic community, whose descendants live in Rome to this day, has rites, traditions, history, and a dialect that are unique in the Jewish world. Today, visitors to Rome can tour the Jewish Museum or visit Nonna Betta in the Ghetto or C’e’ Pasta e Pasta in Trastevere for an introduction to local Jewish classics. But many elements of Roman Judiasm remain obscure to those outside the small community.

I sat down with Umberto Pavoncello of Nonna Betta, a kosher restaurant in the heart of the Jewish Ghetto, to learn about Roman Rosh Hashanah traditions. Umberto recounted some family recipes, including several very ancient ones passed down by his grandmother (Nonna Betta herself).

He told me of a soup called boccette in brodo in which beef bones, nerves, and herbs are used to enhance the flavor of the broth. Lean beef meatballs are cooked directly in the boiling broth and the finished soup is served with toasted bread. Like boccette in brodo, hgozzamoddi also incorporates bones for flavor. But in that recipe, ground meat is combined with pulverized bone fragments to create meatballs that reflect the necessity to use every last scrap. Another broth-based dish is Carcioncini, which is similar to torellini in brodo.

Another dish, triglie con uvette e pinoli sees deboned red mullet cooked with pine nuts, raisins, olive oil and apple cider vinegar. Torzelli are quartered wedges of endive served baked or fried. A typical Rosh Hashanah dessert is lo storto. Few people make the half-moon shaped cake at home, preferring to buy it directly from the Forno del Ghetto (aka Boccione), the kosher bakery on Via Portico d’Ottavia 1. The super sweet cake is made from almond paste, pine nuts, and raisins, and is clad in a glazed crust.