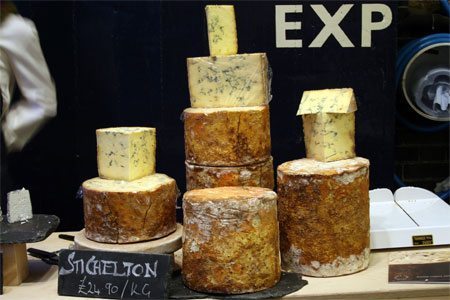 Stichelton is an English blue cheese that can be likened to a raw milk Stilton. In fact, it follows the same recipe that was used to make Stilton until producers began using pasteurized milk after a food poisoning outbreak in 1989. Stichelton is made from a smalll amount of rennet and the unpasteurized milk of Friesian-Holstein cows that graze on the Welbeck Estate in Nottinghamshire. The cheese sets for five days at the dairy and is aged for six weeks before being sent to the Neal’s Yard drying rooms under the railroad tracks in Bermondsey for another six weeks. The result is a cheese that is deeper, richer, and more concentrated than its cousin Stilton with nutty, toasty, and caramel notes. I buy Stichelton at Neal’s Yard Dairy in London’s Borough market and it is available online for UK customers here. It is also sold at selected stores in the US.