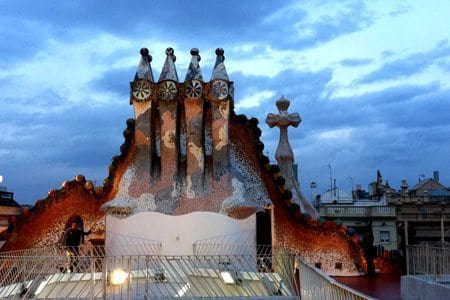 Against all odds–a violent cough, congestion, and a dulling of the senses brought on by the worst cold I have ever had–I was able to do some serious damage in Barcelona last week. I flew in on Wednesday to meet Mamma Parla for a five-day trip. I am actually quite amazed they let me board the flight considering the miserable condition I was in (sorry to all my fellow Vueling passengers!). But I made it. And with a combination of regular feedings and maternal nurturing, I am now mostly better.

In spite of my illness, we had a great time, did a ton of walking, and saw some amazing things. The absolute highlight was Gaudi’s Casa Batllo’, a noble home that seems to breathe and sigh. Its inspiration is nature; its patterns and rhythms draw their forms from fossils, bones, and especially the sea. It was worth every penny of the €17.80 admission fee and the audio guide (included) was very well done.

We also enjoyed the Museu Nacional d’Art de Catalunya. The Gothic art collection is stunning and the Romanesque section is made up of entire church apses, which have been removed from their original locations in the Catalonian countryside and reassembled in the museum.

The rest of the trip was dedicated to shopping for food and eating. We rented an apartment through Destination BCN (which I would HIGHLY recommend) so we had cooking facilities. The kitchen was very well stocked and the appliances were all brand new. And the apartment had a clothes drier! This is not food related, but it was very exciting for me, as I don’t have one in Rome (capital of Italy and hard water). The location, just off Plaça Catalunya on the cusp of Eixample, was another plus. 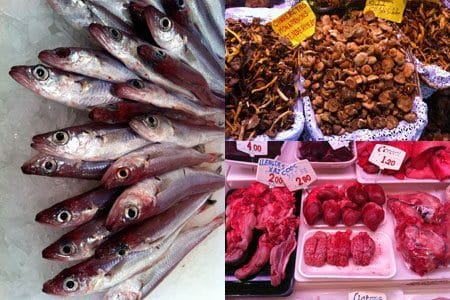 But I digress…we were able to do some cooking in the apartment and prepare some snacks, as well. We did most of our shopping at the municipal markets like Mercat de Santa Caterina, Mercat de Sant Antoni, and Mercat de La Barceloneta. After about five minutes in the uber touristy Boqueria I wanted to shoot myself but I was afraid someone would immediately steal my iPhone off my corpse, so we left instead.

We did our other shopping at the phenomenal Formatgeria la Seu, a cheese shop in the Gothic Quarter devoted exclusively to Spanish cheeses run by expert and enthusiast Katherine McLaughlin. Our other favorite shop was Jamonisimo, where jamón ibérico de bellota (cured ham made from acorn-fed pigs) is hand sliced. More on this place later. We also bought some nice and simple craft beers by Art Cervesers at an artisinal food market in Plaça del Pi. Their “Flama” ale and “Orus” lager paired nicely with our cheeses and hams. 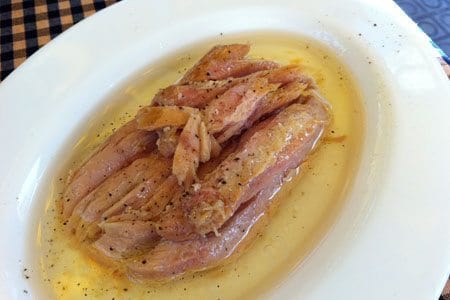 Tapaç24: Our first proper meal was lunch on the day of our arrival at Carles Abellan’s busy tapas place. The weather was unseasonably warm so we grabbed a table outside and enjoyed the sun, along with some simple, tasty tapas, which included the house bikini (finger sandwiches with ham, cheese, and black truffles), ventresca di tonyina (velvety tuna belly), and croquetas (potato croquettes). Tapas 24 is located in Eixample at Correr Diputacio’ 269.

Passadis del Pep: We devoted our first dinner to fish. Passadis del Pep doesn’t have a proper menu. They just bring plates and pour cava until you–or they–have decided you have had enough. There were prawns, scampi, clams, and baby squid. And, of course, some jamón ibérico was thrown in for good measure. The desserts were nothing special, but the rest of the meal was perfectly good. Passadis is located between El Born and La Barceloneta at Pla de Palau 2. 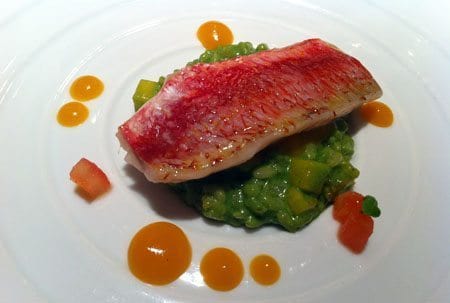 Cinc Sentits: When confronted with an assortment of tasting menus, I always go for the whole shebang, the maximum number of courses and premium wine pairing. I just can’t help myself. Such was the case at Cinc Sentits, a tasting restaurant owned by self taught chef Jordi Artal and his sister Amelia, who runs the front of the house. The excellent meal, a crash course in the flavors and textures of contemporary Catalan cuisine, was paired with a wonderful selection of Spanish wines. Their suckling Iberian pig would be the best of the trip. Cinc Sentits is located in Eixample at Correr Aribau 59. 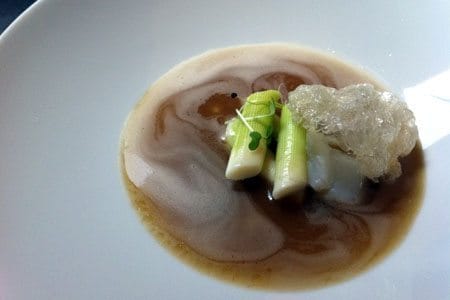 Moo: The back of the Omm Hotel’s lobby is occupied by the Roca brothers’ ultra modern Michelin starred restaurant. A large undulating sculpture in the center of the room looks like a massive prawn and there are all sorts of other funky design pieces in the place. The food is equally focused on form and aesthetics. Each item of the “Season Menu”, from the gold dusted foie gras bonbon amuse-bouche to the honey and flowers dessert looked like an abstract work of art. The highlight of the meal was a leek soup in which leeks were stuffed with a cod paste. The wine pairing was a very accessible €25, which somehow softened the blow when the check arrived. Moo is located in Eixample at Correr Rosselló 265.

Jamonisimo: The bulk of Jamonismo is devoted to selling jamón ibérico, cheese, and fine canned anchovies over the counter. There are also a couple of tables in the back where you can eat some ham and drink some cava. Their hams and other cured meats are sensational and they will vacuum pack items to bring home, though I’m sure that damn beagle that greets the Italy arrivals at Philly would have snagged me in two seconds. Jamonismo is located in Eixample at Carrer Provença, 85. I think there is another shop in Carrer Muntaner. (UPDATE 2016: NOW CLOSED) 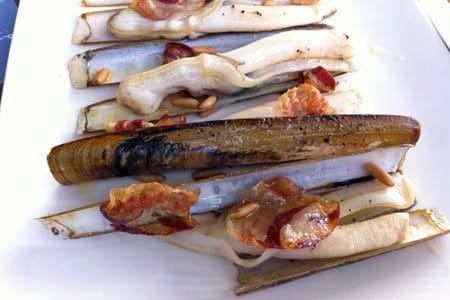 La Mar Salada: Seafood feasts on Sundays have long been a past time of mine in Italy and I was more than happy to continue the tradition with Mamma Parla in Barcelona. We really enjoyed our lunch: salted anchovies, razor clams with ham and pine nuts, steamed mussels, and seafood paella, the house specialty. The seafood was flavorful and fresh and the setting was perfect. La Mar Salada is located in La Barceloneta at Passeig Joan de Borbó, 58-59. 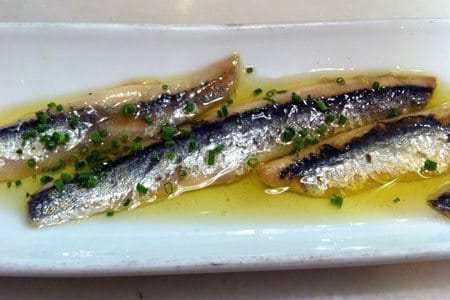 Bar Mut: This tapas bar with a fine wine list was a good bet for Sunday dinner, when most decent restaurants in town are closed. We reserved two seats at the bar and had an assortment of hot and cold dishes, including croquetas, boquerones (marinated white anchovies), eggs with chorizo, and rabo de buey (oxtail). The tapas were mostly good–the croquetas were ice cold in the middle–but the place is a bit pricey for the rather straightforward preparation of its dishes. It has great ambience, which is free. Bar Mut is located in Eixample at Carrer Pau Claris, 192. 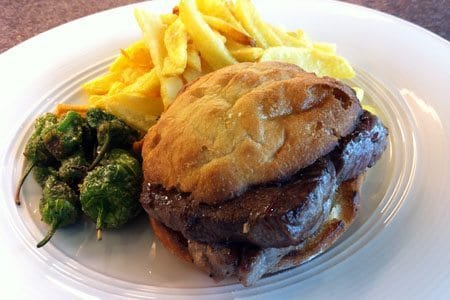 Porta Gaig: No matter what I do, I can’t manage to eat light. I figured I’d pick up a granola bar or something at the airport but instead, I saw signs for Porta Gaig in Terminal 1. Mamma Parla and I hadn’t made it to Carles Gaig’s Michelin starred restaurant in the city, so I took Porta Gaig’s presence as an obviously sign that one more heavy meal was in order. I grabbed a seat at the bar and ordered off the bar menu, which is more limited than what is served in the main dining room. I opted for jamón ibérico de bellota (obviously), pa amb tomàquet (bread rubbed with tomatoes and drizzled with olive oil), and a Girona veal sandwich. I clearly napped the whole flight home.