Skip to content
Home/The Worst of 2010, Rome Edition
Previous Next 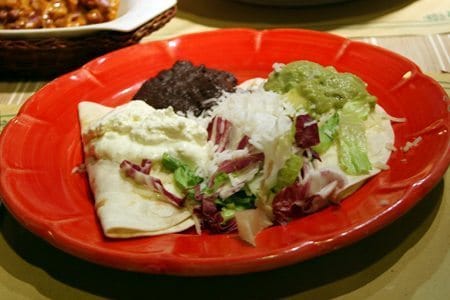 How exactly am I supposed to eat these foul tacos with all that shit on top of them?

I’m still working on my “Best of 2010” list (it’s gonna be a LONG one this year) so I thought I’d get the much shorter “worst of” list out of the way first. If you are like me, a bad meal is a tragedy, a squandered moment of deliciousness that leaves you with paradoxical feelings of emptiness. I’ve jotted down a few memories of the worst meals I’ve had in the past 12 months. I hope you’ve had fewer!

Bir & Fud: Billed by a dwindling number of people as being among the best pizzerias in Rome, Bir & Fud has continued to decline in quality since the departure of consultant Gabriele Bonci, Rome’ star pizzaiolo. Many are the rumors about the divorce between Bonci and Bir, but one thing is certain, the pizza at this Trastevere joint is nothing special. After a wonky and less than delectable pizza in late 2009, I returned for a second try and, once again, found the pizza to be tremendously disappointing. On the upside, they serve great beer.

Griglieria La Vaca: It is so painful to think back on the meals I had at this Monti-based Mexican restaurant. Phrases like mayonaise vat, microwave cooking, and dog food come to mind. It would have been amazing to have a good Mexican place close to home. Instead we got this.

L’Arcangelo: I had a terrible meal back in May, which sparked a massive controversy when the Italian blogosphere finally noticed my less than complimentary post months later (well done guys!). Apparently irreverence and hyperbole don’t translate so well…Several trips back have redeemed the restaurant and now, it makes my list of favorite restaurants in Rome. Just more evidence to support the theory that in Rome, you can’t just choose what you want off of a menu, you really must know what to order.

Mexico al Aventino: Griglieria La Vaca was a low point in my gastronomic existence, but this place isn’t far behind. On a trip in July, the gazpacho was the absolute worst I have ever had (think Hunt’s ketchup cut with dish water). Tacos de pollo were a step below airplane food and the rice had the consistency of boiled toilet paper. I’m quite sure no one in the kitchen has ever eaten Mexican food before. I am seriously still depressed about this place. How they are affiliated with Slow Food is beyond me.

Obika’: The new-ish addition to Campo de’ Fiori is part of the expanding Obika’ Mozzarella Bar empire. The uninspiring quality of product at the original Piazza Firenze branch has been brought to Campo, but with staff that is painfully uninformed about Obika’s food and wine. Mozzarelle shared with clients this summer were poor ambassadors for the south-central Italian specialty. Definitely a place to check out if you love wasting money and hate food.

Open Baladin: I like this place. I really do. For the beer. Unfortunately, this doesn’t make the food taste better. To be fair, sometimes it is really good. Potato chips with licorice powder I had in September were amazing. The next pair of times, not so much. The food is generally inconsistent, yet there are three constants at Open: an ample beer selection, good service (I’ve heard claims to the contrary but I’ve always been treated very well), and a vile burger that is nothing more than seared steak tartare. This flacid patty doesn’t bleed when cooked rare and is served on an untoasted bun. I call it a crime against cattle.

Pierluigi: After a long hiatus, I returned to this place for another try this spring. I’ve disliked Pierluigi on past visits, finding the food to be abundantly mediocre, which is why I stayed away for years. And so it was again when I went for lunch and had so-so pasta and fish that was swimming in a viscous pool of butter. Ewe.

Primo al Pigneto: Ugh! So over this place. More here.