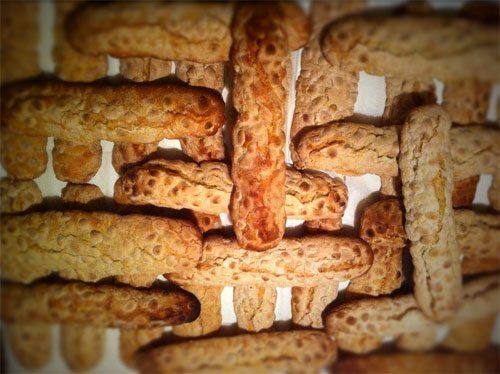 Back by popular demand, a post dedicated to Nic Roome’s tozzetti. After publishing a piece about them this weekend, I got some emails and DMs requesting the recipe. I asked Nic to make a major exception (he rarely shares his secrets) and write a guest post with recipe included. He graciously accepted. Here’s what he has to say about his trials and eventual success:

“My relationship with baking is a feisty one. Sometimes I argue with the oven, occasionally I fall out of favour with the mixer, and the baking tin sometimes insists on not turning out the precious goods…. but I keep going back to them all. Why? Because I love the challenge.

The alchemy and precision of baking is what draws me back each time. A sponge cake may be too airy, the bread dough might be a little too sticky, the biscuit mix possibly too sweet. Here is where the fun begins and experimentation, imagination and frustration come in to play.

I found myself pulled back onto this familiar merry-go-round of tryouts when I recently embarked on perfecting a tozzetti recipe for Katie’s upcoming Rome for Foodies app launch. Dating back to Medieval times, the twice-baked speciality of Rome and the Lazio region of Italy (and a close cousin to the more famous cantucci biscuit), the humble tozzetto wasn’t as simple as it might appear….

After trialling three different recipes, each different and delicious in it’s own way, none of them seemed to quite hit the mark. Extracting the best bits from each trial and re-blending them into my own recipe was the only way forward! I stole the aniseed from one, replaced the caster sugar with icing sugar from another, and finally used the traditional shaping method from a third. Aaah… at last. Success in the flavour, texture, and shape!

If I’ve never made a particular biscuit, bread, pie or cake before, then I usually try to stick with a classic tried and tested recipe. Once familiar with how the end result should be, and when I know where I want to take the texture or taste, then I allow myself to start playing around with quantities.
Here’s the final recipe from my recent trials and toils in tozzetti making. Try it. But remember….it’s not set in stone. Set the alchemist in you free!

Method:
Start by roasting the hazelnuts and almonds. Around 7-10 minutes at 200C should be okay, but use your nose to check they don’t burn! Set aside and allow them to cool. (TIP…The hazelnuts will need their skins taken off, which is best done by wrapping them all in a clean tea towel and rubbing them together until the skin flakes away).

Next, sift the flour, sugar and baking powder into a large mixing bowl, making a small well in the centre for your wet ingredients. Sprinkle the crushed aniseed in too. Break the eggs whole into the centre, and follow with the vanilla essence and the shot of Sambuca. Mix well. This can be done one of two ways. Plunge your hand in and be brave! Or, if making larger quantities, use a mixer with the dough hook. Finally, add the cooled nuts and bring together. The resulting mix should resemble a sticky but malleable bread dough. Next, dust your hands and work surface with plenty of flour and roll the dough into a ball. Divide this in two, and roll each half out into a sausage shape, around 30cm long. They should be about 5cm in diameter.

Place the two dough sausages onto a baking tray lined with baking paper. Bake at 200C. Check them with a wooden toothpick after 20 minutes to see that the dough has dried out and the crust is a golden brown. If not, then give them another few minutes. (TIP… you want the crust to be slightly cracked open, as this adds texture to the final tozzetto). Once ready, leave to cool thoroughly on a wire rack. After cooling, it’s time to slice your two loaves into the tozzetti biscuits and second bake them for that classic crunch.

Take sharp knife, long enough to span the loaf at a 30 degree angle. (TIP… Don’t be tempted into using a bread knife (like I was first time around!) as this will ruin the crust and also may not slice the nuts cleanly and precisely). Cut each loaf into 1.5cm thick diagonal slices and place them cut-side down on a non-stick baking sheet and bake at 150C for 30 minutes until dry, crunchy and ever so slightly browned. (TIP… I flip them over after 15 minutes to make sure they are evenly done, and don’t worry if they still feel a tad springy when they come out, as any residual moisture will evaporate when they hit the cool air). Turn onto a wire tray until cooled. Enjoy with a dessert wine after dinner, or with your favourite cup of coffee!”

If you would like to learn more about Nic’s rates and services, email at fieldingstreetbakery@yahoo.co.uk. 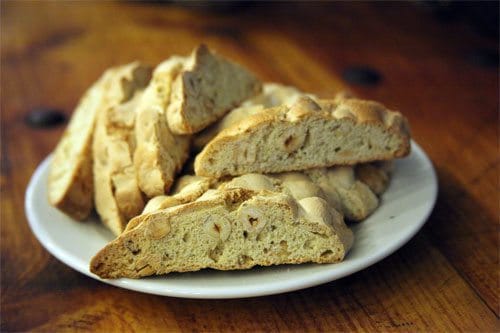