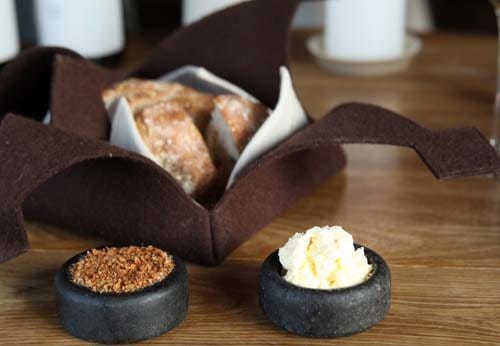 Once the snacks (see Part 1) concluded, a felt parcel containing a loaf of sourdough bread was delivered to the table along with a side of virgin butter and the greatest spread on earth: whipped pork fat with apple aquavit and scratchings. This signaled the tasting menu was about to begin. I inquired about a Danish wine I had tried at Fiskebaren in September and we agreed that it would be a suitable pairing with the first dishes. 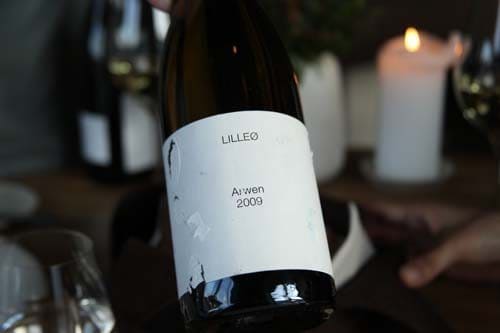 Anders Selmer, the former wine director at Noma, has begun making whites under the Arwen label on the island of Lilleø. The endeavor is supported by Noma’s co-owners, culinary entrepreneur Claus Meyer and chef René Redzepi (whose daughter named the wine). Arwen is a Sylvaner-Riesling-Solaris blend. 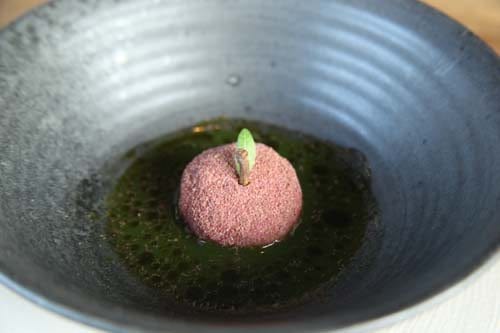 The first dish was a cold garden sorrel and coriander broth served with a sphere made from Jerusalem artichokes and apple skin powder, garnished with an edible stem. 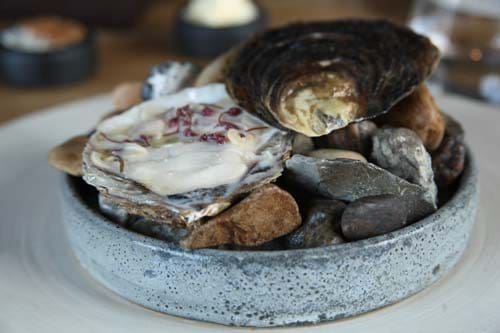 Next was a sliced Limfjord oyster, served with a splash of buttermilk and garnished with seaweed and pickled gooseberries. The oyster was served resting on a bed of stones. This reminded me of my friend John’s guest post about Noma in which he spoke of plating to reflect habitat. 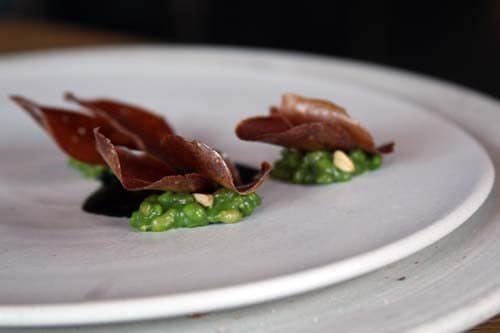 The third dish was among my favorites: thinly sliced dehydrated scallops sailed on a bed of watercress, biodynamic grains (emmer, spelt and kamut), beech nuts and squid ink. 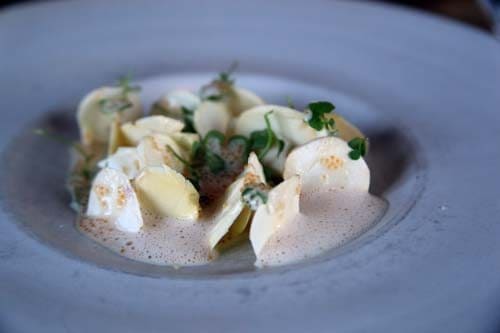 But my absolute favorite dish (well, tied with one of the desserts, actually) was fresh sliced chestnuts with chopped walnuts and a white wine/butter/fish roe sauce. The flavors were rich and surprising. 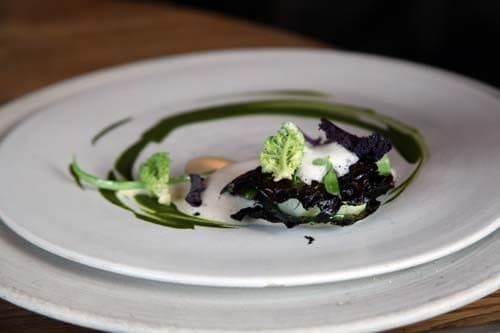 The next dish was pike perch barbecued in a cabbage leaf served with verbena and dill. 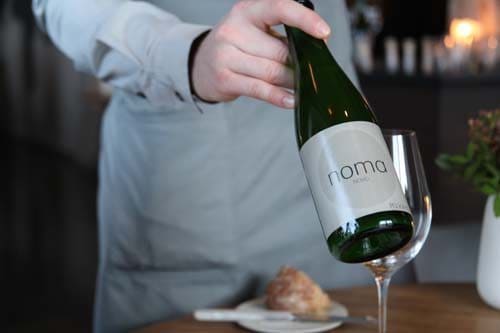 At this point in the meal our glasses were empty and we decided to go for another beverage that is the fruit of artisanal collaboration. Noma and Mikkeller have teamed up to produce Novel, a fruity malty Belgian strong ale. 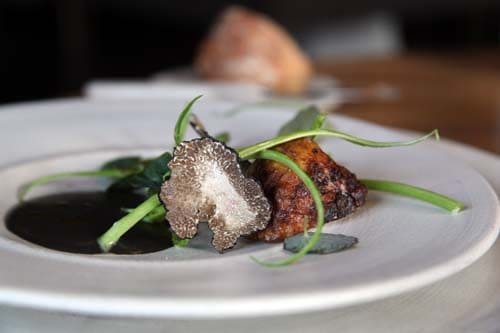 Perhaps the least successful dish, in my opinion, was the celeriac with Swedish truffles. The celeriac had been cooked very slowly and the flavor and texture were nice, but the truffles did nothing to enhance the dish. It is kind of cool that there are truffles in Sweden, but they are decidedly less cool on the plate. 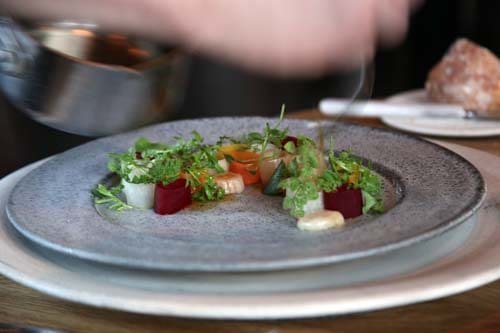 But then there was one of Noma’s signature dishes to make it all better. It has been tweaked and honed over the course of several years and its current incarnation features seven types of thinly sliced vegetables–pickled in seven types of vinegar– fashioned into tight cylinders and served alongside slick disks of bone marrow (or meat butter as one of my dining companions lovingly called it). The vegetable rings and pats of marrow were dressed with a sauce made from roasted pork bones. I want that sauce to be part of my last meal. 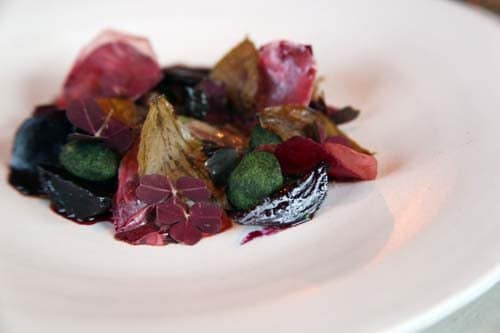 The final main dish was wild duck, beets, beech and malt, a jarring collision of deep reds that resembled the forrest floor where the duck may very well have landed when shot out of the air. 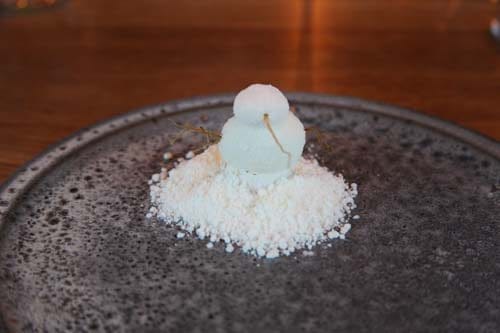 Elderflower and yogurt were transformed into an undeniably cute snowman. 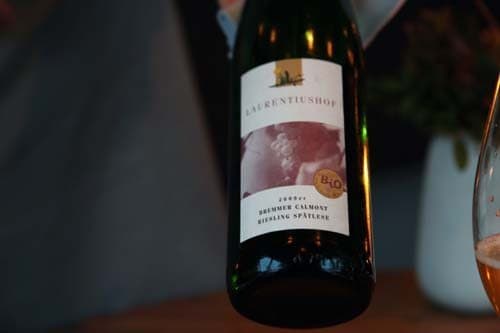 This was served with a 2009 Bremmer Calmont Riesling Spätlese. 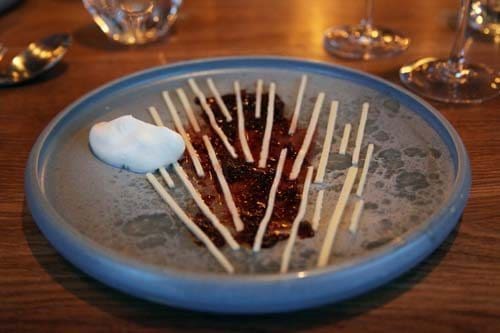 And last, the dish that tied for first: strips of potato puree with plum jam and whipped cream made with the plum pits. The result was a subtly bitter, sweet, starchy masterpiece. It was a brilliant piece of art by pastry chef Rosio Sanchez. 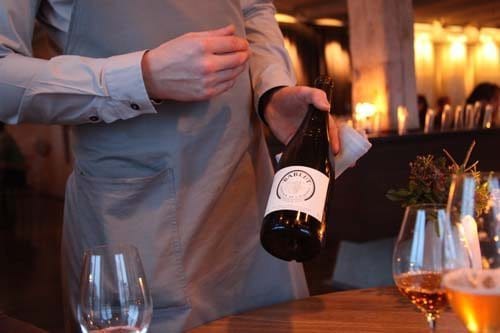