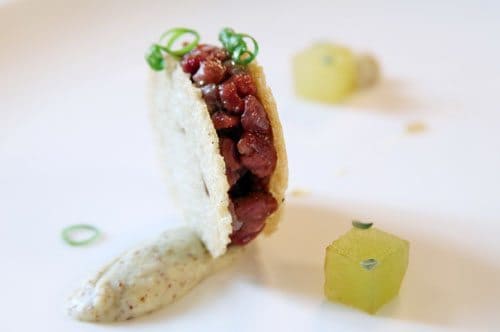 2011 is coming to an end and I have asked some friends to reflect on their best meals, dishes, and food experiences from Rome this year. It has been a great year of food memories and here is what cooks, food writers and historians have enjoyed the most:

Maureen Fant (food historian): My husband Franco has always enjoyed celebrating his December birthday with considerable conviviality, and lately we’ve settled on Checchino’s private room with about twenty relatives and other intimates. This year, however, the party had to be on a Sunday, so no Checchino. Instead, we took over La Battilonta, a newish trattoria, somewhere near the Furio Camillo metro station, run by a butcher and partner and serving very old-fashioned food. It took Oretta (of course) to explain the etymology of battilonta even to those of us who had an inkling what it was. It’s the board on which you whack the pork fat (figure it out). We started with supplì the size of ostrich eggs and continued with panzanella, trippa, fagioli con le cotiche, carciofi alla giudia, gricia, coda (after having had its sugo on rigatoni), involtini, and arrosticini, finishing with a very traditional torta di mele. From Uncle Mario, son of a Roman butcher, to the engineers to young nephew Giovanni, whose sport of choice is fencing, to gastro-scholar Oretta, to friend Iris and me from Manhattan, we were all as one, reveling in the comforting, straightforward tastes of unreconstructed Roman tradition.

Irene de Vette (food writer, blogger): Wow, I got so many wonderful food memories this year…making (and eating) momos in Nepal, an awesome beef curry in Lahore, my mom’s spicy hare stew, and in Istanbul incredible su böreği, uykuluk, grilled fish and of course kaymak! For eating out in Rome, I’d say that the gnocchi alla matriciana at L’Arcangelo really stand out in my memory. Before moving to Italy I had never been to fond of gnocchi because they were often just chewy glue balls in sauce. Here in Rome, they are the fluffiest delicate little cushions possible. It’s the local starchy potato variety that does the trick, I suppose! But only in the right hands, obviously. Leave that to the kitchen staff at L’Arcangelo, where they serve the gnocchi in an amatriciana sauce with nice chunks of guanciale. Di-vine! In terms of sweets, the raspberry-sage gelato at Gelateria del Teatro and the pistachio gelato served with mortadella cubes at the first ever aperi-gelato at Il Gelato (I guess that’s savory-sweet). Can’t wait for the next one!

Gina Tringali (food historian, food blogger): Here goes…best bite of 2011 in Rome, sweet home, I loved the dining extravaganza at the Michelin-rated, Glass (ravioli filled with liquid 60-month aged parmesan topped with white truffle shavings stood out), but at heart I’m a trattoria girl. I’d have to say picchiapò, a typical poor-man’s dish (beef boiled over a low flame for 3 – 4 hours with onions, carrots, celery and peeled tomatoes) and cicoria ripassata (chicory sauteed with olive oil, garlic and hot red pepper) with a hunk of bread to sop up every last bit of sauce at Da Benito.

Tavole Romane (food bloggers): The carbonara from Cesare al Casaletto wins our “Oscar” for 2011. There is a fine line between a luscious cabonara and a fritatta. At Cesare, they make an al dente carbonara with the pasta of your choice (mezze maniche, rigatoni, tonnarelli, or gnocchi di patate) and it is served with a prefectly creamy sauce with abundant bits of crispy guanciale.

Eleonora Baldwin (food blogger): Ok so for my year’s best bites I didn’t have to leave my neighborhood. All’Oro‘s cappelletti di brodo asciutto and their surprising liquid filling burst in my mouth and left me wanting more that just the five swimming in my bowl of consommé flecked with subtle saffron accents. The other tastegasm of 2011 came at Metamorfosi with Chef Roy Caceres’ glazed eel paired with ground spelt and a punchy carpione onion and vinegar sorbet. The eels from Bracciano were slowly grilled over aromatic wood chips and glazed with a sublime blend of Asian flavors.

Hande & Theo Leimer (wine educators): Other than some delicious but simple bites at home, especially some great locally sourced fish and meats that we manipulated as little as possible and some street food here & there (porchetta from Bernabei in Marino, pizza rossa on some days at Roscioli), one dining out experience is still in our minds: Metamorfosi in Rome. We loved the (seemingly) effortless way that they put things together that were (seemingly) totally irrelevant but made so much sense – and it was hands down the best wine pairing (by the glass) of the year, too.

John Regefalk (chef, food blogger): 2011 for me has been a year full of work. I have been working in a number of different restaurants with some really spectacular ingredients and impressive finished plates as a result. The chances to eat out while abroad have been plenty for me, but when it comes to Rome I feel I have missed out a bit lately. I still know good food when I see it, though. One of the dishes that springs to mind when asked to present the best bite of 2011 is a starter I had during a most enjoyable and plentiful meal at restaurant Pipero al Rex, a newly opened restaurant in central Rome. I had an excellent goose breast tartare, with a rich mustard sauce and cubes of marinated apple. The tartare was sandwiched between two crispy bread chips. The savoury tartare, with its slightly gamey flavor but soft texture, was skillfully counterbalanced by the mustard sauce and the sweet crunch of the apples. Nice contrasts, both in texture and in the salty-sweet registry. The final touch of fresh herbs then lifted the composition into my 2011 Hall of Fame.