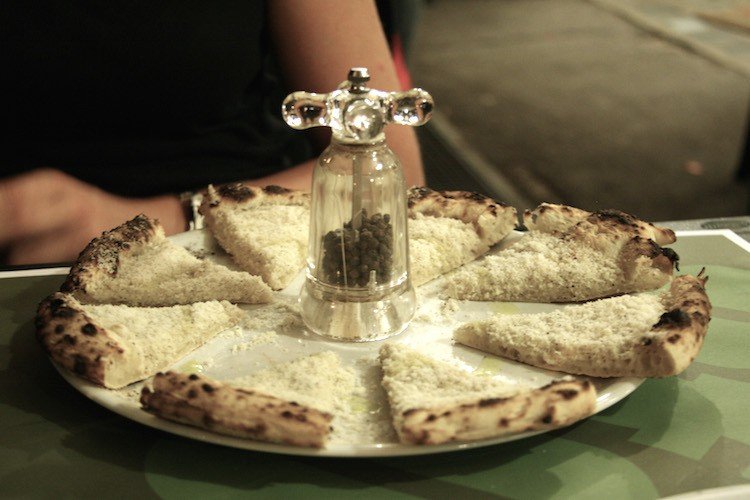 Stefano Callegari, Rome’s premier pizza innovator, relies on surprising techniques to craft creative pies like cacio e pepe pizza. For this super savory pizza, he draws on the main components of the popular pasta dish cacio e pepe (Pecorino Romano cheese and black pepper), which he liberally applies to a dough base. At his three pizzerias, Sforno, Tonda, and Sbanco, Stefano distributes shaved ice over the shaped raw dough before baking it in a domed wood-burning oven. The 425°C (800°F) oven melts the ice and leaves the cooked dough slightly tacky, which helps a liberal dusting of salty cheese to stick. The final touch is a healthy dose of freshly ground black pepper, which packs a piquant punch.

If you’re hungry for this deliciously Roman pie but can’t make it to one of Stefano’s pizzerias, non ti preoccupare! My dear, dear friend, baker extraordinaire chef John Regefalk has adapted this pizza for a home kitchen. A modified version of John’s Stefano-inspired cacio e pepe pizza appears in the September issue of Food & Wine. You can read my whole Rome feature online here or in the magazine.

One advantage of this pizza dough recipe is its versatility when it comes to timing the bake. The bulk rise takes about 12 hours and could very well be done overnight. Then the dough is divided and shaped. The shaped dough balls go straight into the refrigerator and can stay there for anywhere from 8 to 36 hours, or even longer. When it’s time to bake simply take out the amount of dough needed, shape and bake, leaving the rest of the dough for later.

In a large bowl, combine the flour with 650 grams of water and stir with a spoon or with your hands until there is no more dry flour in the bowl. The dough shouldn’t look homogenous, though, more like a shaggy mass. Cover the bowl with plastic wrap and set aside at room temperature for 30 minutes.

Pour the remaining water into a small bowl, add the yeast, cover with plastic wrap and set aside at room temperature for 30 minutes.

After 30 minutes, dissolve the salt in the yeast mixture, then add this to the resting dough. Incorporate by pulling the dough softly, turning it over, squeezing it, gently spinning it around in the bowl. Absorption will be slow but every dough decides for itself how fast to loosen up and incorporate the ingredients. Once the salted yeast mixture is incorporated, cover the bowl again and allow the dough to rise for 30 minutes.

Uncover the bowl. With one wet hand, lightly grasp one edge of the dough. Pull the flap upward and outward, then attach to the top of the dough. Turn the bowl a 1/8th turn and repeat until you have rotated the bowl a complete turn.

Cover the bowl with plastic wrap again and repeat the folding procedure one more time after 30 minutes have passed. Then, place the dough in a clean bowl lightly greased with vegetable oil. Cover and set aside to rise for about 11 more hours at room temperature (20-21°C). The dough should almost triple in size.

Carefully invert the dough over a lightly floured work surface and separate into 6 equal pieces. Pull the edges of each piece of dough and fold them onto the top of the ball, then turn each ball “seam-side” down on the work surface. Working one ball at a time, shape by gently rolling on the work surface.

Once all the balls have been shaped, put them on an oiled tray spaced apart, brush them lightly with vegetable oil and cover the tray well with plastic wrap. Put the tray in the fridge (about 4°C) and let cold-rise for at least 8 hours.

Preheat the oven and a pizza stone to 300°C (or as hot as possible). The stone should be placed one step up from the central rack position. If you do not have a baking stone, a baking sheet turned upside down and heated together with the oven will work as a decent substitute. During the last 10 minutes of pre-heating, turn on the broiler element to further raise the temperature in the oven.

Meanwhile, remove the dough from the refrigerator and allow it to come to room temperature, about 30 minutes. Working one dough ball at a time, place on a well-floured work surface, then sprinkle more flour on top. Form into a 6-inch diameter disc by pressing your fingertips into the dough leaving the edge untouched and the center portion just slightly thicker than the rest. Then, using the palms of your hands and working from the middle outwards, stretch and turn the dough until you have a 10-12-inch diameter disk.

Place the shaped dough onto a pizza peel or onto an inverted baking sheet lined with parchment paper. Add a small handful of crushed ice on top of the dough, distributing evenly. Transfer the dough directly onto the baking stone or pre-heated baking sheet. The ice will melt, creating a moist base for the Pecorino. Bake for 4 to 6 minutes, or until the border is slightly charred. Remove the pizza from the oven and sprinkle liberally with Pecorino Romano. Season with black pepper and a drizzle of olive oil. Serve immediately. Repeat with remaining dough. 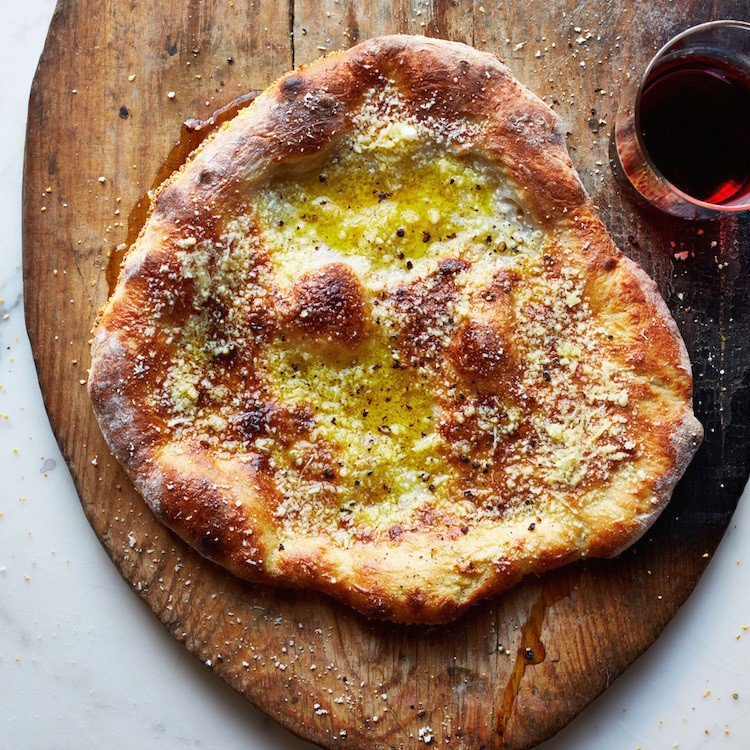