The Five Day Bender with Şemsa 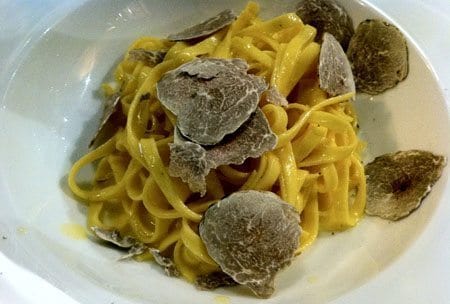 My friend Şemsa, chef and owner of Kantin in Istanbul made her first trip to Rome this week. When I found out she was coming for five days, I immediately began making a list of the essential places any chef, cook, food writer, or gastronome should visit while in Rome. It was immediately apparent that we would need a minimum of five weeks to cover the basics, so I did some trimming and narrowed down the list to the essentials. I can proudly say we left no slab of guanciale unturned and, while we didn’t get to visit every place I had hoped, we did a pretty good survey of Rome’s culinary landscape in such a short amount of time. 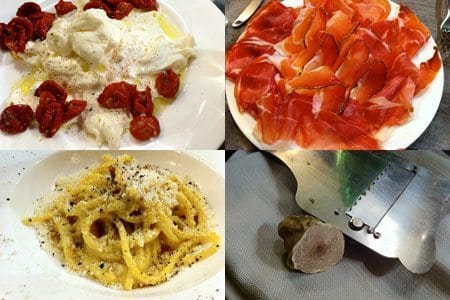 On Şemsa’s first night in town, I took her to Roscioli for dinner. This vineria/salumeria/restaurant serves two of my top 20 dishes in Rome: burrata with semi-sundried tomatoes and one of the best carbonaras around. Neither disappointed. Nor did the four types of prosciutti (heavy cured pork consumption would be a theme for the next 5 days). Since it is white truffle season, we also had Campofilone’s tagliolini with slivers of the aromatic tuber shaved tableside over the buttery pasta. Without a doubt, this dish was worth every cent of those €52. 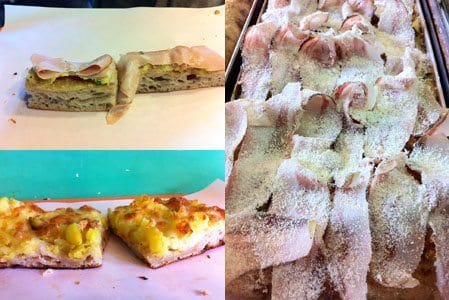 Gabriele Bonci’s pizza by the slice at Pizzarium.

The next morning, we grabbed some pizza bianca at Roscioli and a cappuccino at Cafffe Camerino before heading over to the Vatican. We worked up quite an appetite visiting the Museums and there was no holding us back when we went to Pizzarium nearby for lunch. We had a slice of each of the seven pizzas on the counter. Highlights were the pizza rossa, one with guanciale, pumpkin and pecorino, and one with mortadella and chickpea spread. We walked off one tenth of one percent of those calories on our way to the Mercato Trionfale for a peek at some local produce and freshly butchered lambs. 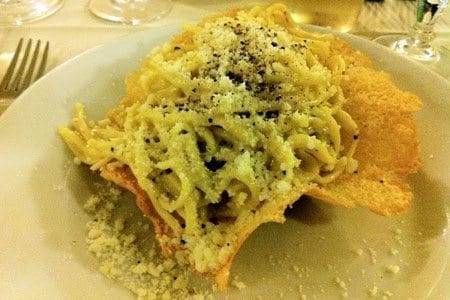 That evening, we had a disappointing dinner at Armando al Pantheon. We were distraught when everything was poorly seasoned or overcooked (have you ever had chalky coratella? It’s the worst!), except for the contorno, a bowl of crisp puntarelle with anchovy sauce. We were left with full stomachs but both of us somehow felt empty inside. The only logical way to deal with it was to go eat again. We hopped in a taxi and hightailed it for Roma Sparita, where the cacio e pepe cured what ailed us. 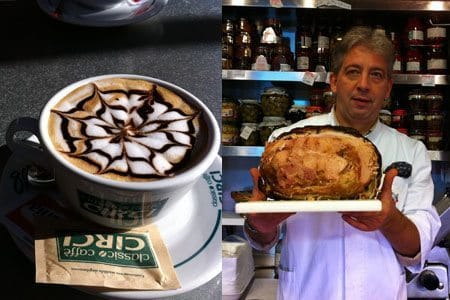 We spent Wednesday morning in Testaccio, with visits to some of my favorite spots: Caffe Barberini for coffee and pastries, Volpetti for guanciale, Farinando for a peek at the breads, La Citta’ dell’Altra Economia to buy flour and dried legumes, and Zi’Elena for more coffee. It started pouring, which washed out our plans of walking around until 00100 opened up, so we bagged that idea and ended up at Palatium for lunch. 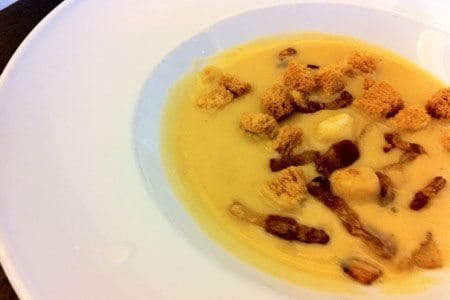 Palatium is one of my favorite places in town. Every ingredient is sourced from Lazio, the food is excellent, and the service is warm and outgoing. We had a wonderful puree of fagioli del Purgatorio di Gradoli (small white beans from near Lake Bolsena) accented with crispy guanciale and cubes of toasted bread. We split a light and flavorful mushroom frittata followed by a delicious millefoglie with kaki. This, of course, left room for another dessert, gelato at Gelateria Corona in Largo Arenula. 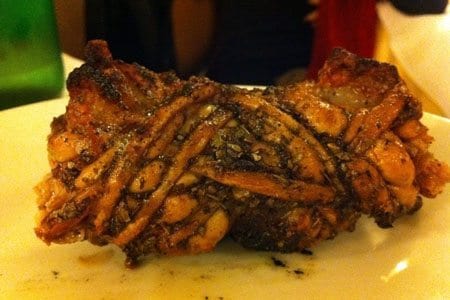 For dinner we went to Pommidoro in San Lorenzo for kokoreç, typical Turkish street food. Well, actually it was spiedone di pajata and is a Roman dish, but it bore uncanny similarities to kokoreç, a favorite of both Şemsa’s and mine. Both are lamb intestines wrapped around chunks of fat and cooked over charcoal. The flavor was amazing and we spread the fat cubes on pieces of toasted bread slathered in olive oil. Never has such a hideous looking thing been so delicious. This definitely ranked among the best dishes I have eaten all year. It was so perfect we ordered a second round. 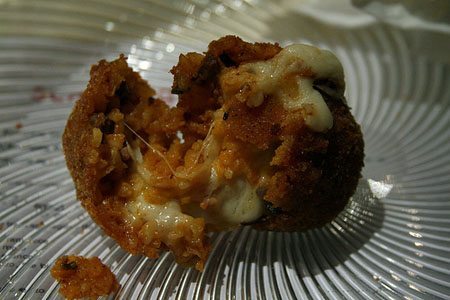 On Thrusday, Şemsa attended a lunch at Al Ceppo hosted by Capezzana, a wine and olive oil estate. As much as I would have liked to attend, I actually needed a break from the three-hour three-thousand calorie luches. We met up that evening for dinner at L’Arcangelo in Prati. On my last visit the chef Arcangelo Dandini prepared an item not typically on the menu, gnocchi all’amatriciana. I contacted Arcangelo and asked if he would make the gnocchi for us and he agreed. We started off with suppli’ and fried crema pastiera first. You know, a light start to a light meal. After the guanciale-rich gnocchi, we had a terrific lamb dish, and finally white chocolate soup with olive oil, ginger and capers. 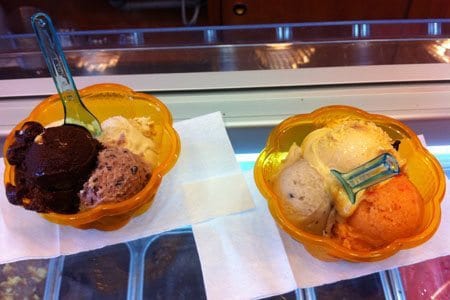 Now we have come to Friday and, I have to be honest, I’m sweating pork fat just thinking about all the food and alcohol I consumed. I think it was easily a six or seven thousand calorie day, but it was for a good cause. It was Şemsa’s last full day and we still hadn’t had mozzarella di bufala di Paestum or Rome’s best gelato, so we went to Casa Bleve and Fatamorgana to rectify the situation. 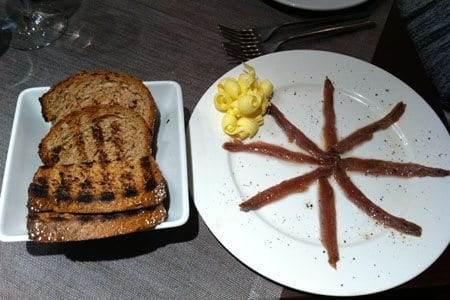 Cantabrian anchovies with butter and toast at Roscioli.

Our last supper was at Roscioli, as we desperately needed more tagliolini with butter and white truffles. We also wanted to order the burrata with bottarga and prawns the people sitting next to us on the first night had eaten. In the end, it wasn’t actually very exciting at all; the raw crustacean completely drowned out the burrata flavor. But the other starter, Cantabrian anchovies with butter and toast, was incredible, as were the truffle tagliolini. 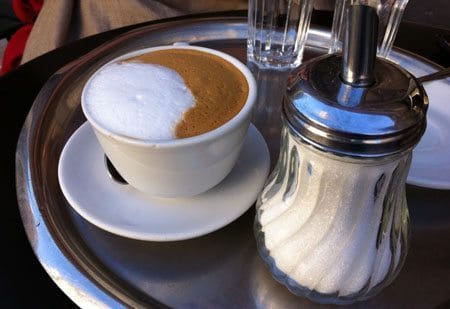 This morning, I picked up Semsa at the hotel for our last jaunt in the city. We stopped at Roscioli for some pizza rossa and pizza bianca, Cafffe Cammerino for coffee and a pastry, and Caffe Sant’Eustacchio for multiple coffees. Somehow we figured that the best way to work off the week’s calories was to overdose on caffeine. I’m going to stick to that plan, combined with lots of raw and steamed vegetables for the next couple of days. Şemsa is now in Florence embarking on a new food adventure. You can follow her dining exploits here here.